September is the start of the school year – and for me – the REAL start of the year.  We have schools across the country who have already informed us that they are either going to become re-involved with our efforts or are starting this year.  I recently toured through the North West Territories and two schools have expressed an interest in being involved – one in Fort Smith and a second in Yellowknife.  At one of the schools, St. Patrick, a young man, Jamie, reached into his pocket and pulled out $20.00 that he wanted donated.  In PWK High school in Fort Smith, a young lady named Brooke, has already put herself into a leadership role to try to involve her school.  It’s young people like these who inspire me!

Speaking of inspiration, two young girls, Rosalie and Elissa, had a lemonade stand and raised $50.00.  They had asked that the money be directed to Elijah’s Exodus Children’s Home – which of course – it will.  There will be a specific update in the months to come to detail exactly what this money was used for.

Just out of university we received a donation from Matthew Duncan.  We made a decision to put all of the money he donated to provide for one family – Kanini’s grandmother and the rest of the grand children she is still caring for. 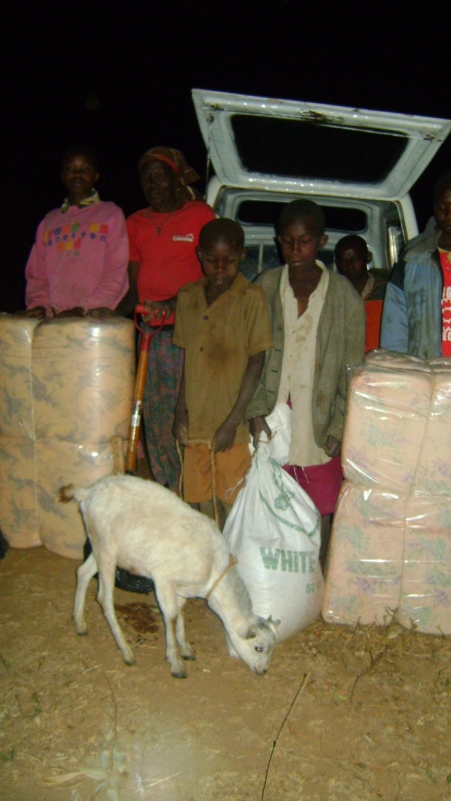 The family received 2 mattresses, two blankets, a set of farm tools, a goat, planting seed and some food.  This donation will make it possible for this family to be warm, to have milk, and to plant food that will help them care for themselves.  This is more than a hand out – this is a hand-up for a worthy fam 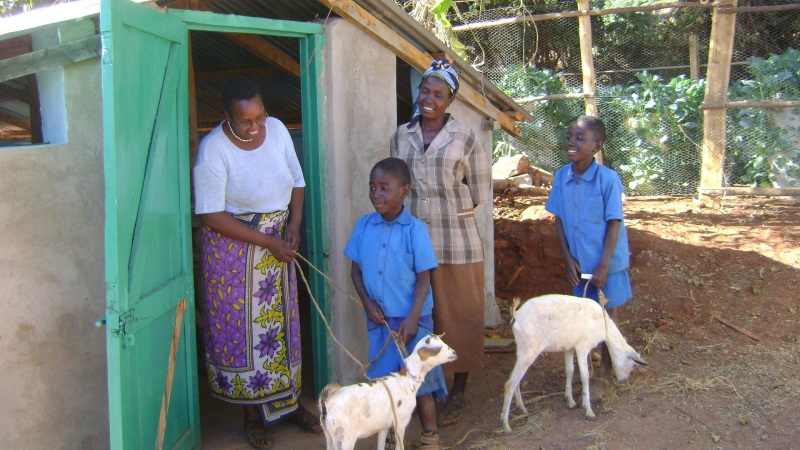 Two more goats – for Charles and Boniface – provided by our good friend, Steve Pitt.  Just an aside if anybody is looking for a great read – try one of Steve’s books. 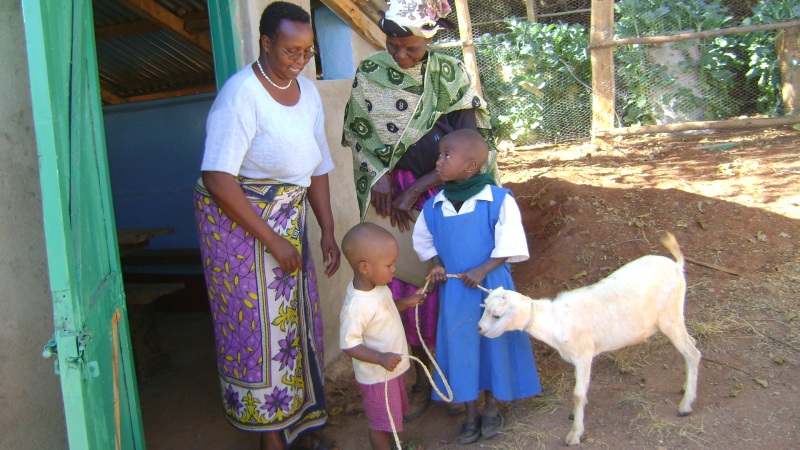 This goat – for Faith – was donated by Margaret who also provided an addtional $10.00 for feed for the goat.  Margaret has also become a sponsor as you’ll see below.

Speaking of goats, while I was speaking in Hay River, Marilyn and Bruce Green gave me a cheque for $40.00 for another goat.  Come December we’ll let you – and them – know who got their goat!

We also received a donation of $110.00 from Canadian Children’s writer, Rachna Gilmore – not just a great writer, but a caring soul!  Just an aside, her book, Mina’s Spring of Colors, remains one of my favourite books and the first chapter is one of the best examples I’ve ever seen on how to foreshadow plot and develop character – something I tell students who wish to become writers.

Zoe – an emerging young writer – donated $200.00 and requested that the money be used for tool distribution.  Right now Phillip is finding the families that could most benefit from these generous gifts and we’ll update that next month.

James R. Henderson Public School is a ‘dual track’ elementary school in the Kingston area. It has a population of over 750 students, half of which go through the kindergarten to grade 6 French Immersion programme, and the other half of which go through the Core programme for kindergarten to grade 8. Four years ago, we decided to get the grade 8s to work on a legacy project – fund-raising for a project that would benefit the school. They embraced the idea. Over the past few years we have added custom benches, purchased picnic tables, and made a mini putt for our school yard, as ways to give back to the school for the years the students have benefited from all that is done here.

This year, we had just enjoyed Eric Walters as a guest speaker in our division, when it came time to decide upon the goal of our legacy project. He had impressed us with his efforts in making specific people’s lives better in a far away land, and we loved the idea that 100 percent of any money raised through schools would go to help the people in question directly, rather than having large amounts of the money shaved away for administrative costs.

All year long, we find ways to encourage our students to reach out to the greater community. Most of the time, it’s local charities which enjoy our support. And while that happened throughout the year at Henderson, we thought it would be very appropriate to raise money for the broader community. We all have so much here, and we wanted to share some of that fortune by helping others. Eric Walters’ foundation seemed like a great fit.

We hold dances at our school a few times over the school year (back-to-school, Halloween, Christmas, etc.). Normally these activities are run by our Media Leadership Council (our form of student leadership). This time, however, we decided to run a couple more dances in the spring, but this time they were planned and run by grade 8 students. By inviting students from grades 5 to 8, we were able to raise hundreds of dollars for our efforts. Other intermediate students got into the act as well, organizing freezie sales on several occasions through June.

All in all, we raised $850 for our efforts. We help it helps, at least a little bit

Hillside Middle School in Mississauga, under the direction of Val Lyon, raised $450.00.  This money was gratefully accepted and in the coming months in the updates we’ll let Hillside know exactly how their money was used.

Faith,  pictured with her grandmother, proudly holds the picture of her sponsors, Bruce and Marie and their children, Erin and Emily.  Faith is six years old and is in Standard One.  She has an older sibling, Nduku who is in Standard eight.  They live in a mud and grass hut with iron sheets for a roof.  Grandmother, who is 72, provides for the family by raising food on their property, milking their cow, as well as welling produce and saplings that she raises.  Her income is around $10.00 per month.  The sponsorship money will be used to help provide food, tools to allow them to raise more food, school uniforms and supplies, and clothing.  In addition another sponsor has already provided them with a goat.

On an interesting note – Fred’s daughter Kate – is considering going to Kikima in the New Year to spend 5 or 6 weeks, staying with Ruth and Henry, teaching at the local elementary school and helping with all the children at the children’s home.  Kate will be the first person to visit and get to know a sponsored child and see, in person, the changes that are being made through the kindness of a sponsor.

Charles, in pink, and his twin brother Boniface, in grey, are pictured standing in front of their grandmother’s hut.   They were born in November of 2001 and their mother, Tabitha, died on May 9th, 2002 when the boys were barely six months old, leaving them in the care of their grandmother.  She has a small patch of land and despite her best efforts she was only able to provide minimally for the boys.  They slept on the floor, had rags for blankets and had virtually no clothing and their school uniforms were in tatters.  It was agreed that the twins would come into the children’s home – of course with ongoing regular contact with their grandmother who lives in the community.

The boys are in Standard 3 and are both excellent students.  Boniface is 3rd and Charles 10th out of thirty-four students.

These two boys are being supported by two separate sponsors.   Charles is sponsored and supported by Margaret and Boniface by Jan and Richard.  Their kindness and generosity has allowed these two boys to have a better life.

Our first residence was opened this month and the first 13 children moved in.  For most of them this was not only the nicest building in which they have ever resided, but the nicest building in which they have ever set food.  Ruth reported that the children were excited, and understandably, a little anxious about their new home and circumstances.  Of course, all the children will continue to have ongoing contact with their extended families and will be visiting regularly.  They started into their new school immediately and are settling in well. 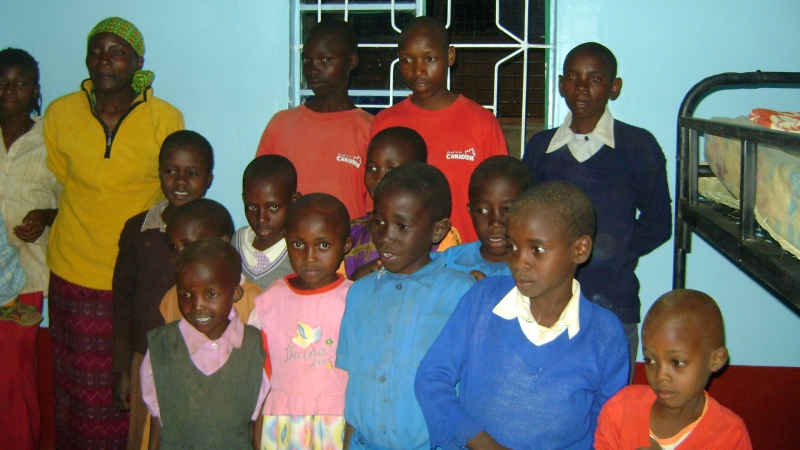 The children’s home was named after Rolling Hills Public School which raised an incredibly high amount of money for The Creation of Hope.  The residence is painted in Rolling Hills school colours and a plaque, formally acknowledging Rolling Hills will be placed on the front of the school.  Abbie Wright, who is the chief organizer at Rolling Hills reports how the students feel like these thirteen children are ‘their children’ and have every reason to feel that way because without them this wouldn’t be possible.  Thanks Rolling Hills students! 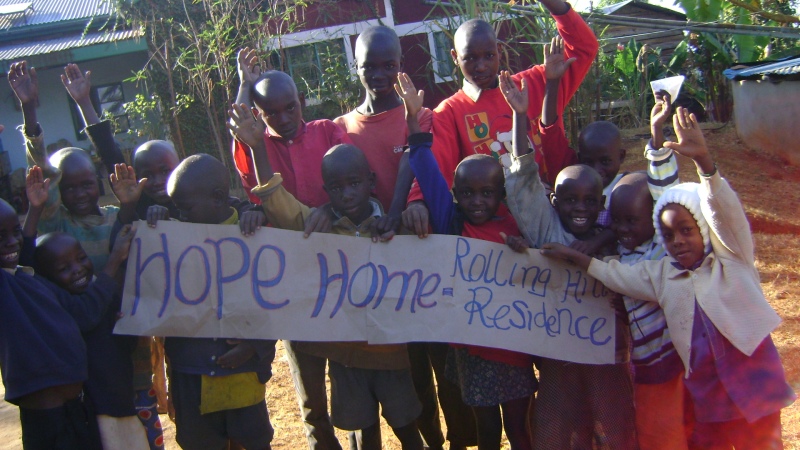 In October Ruth and Henry, their daughter Kay and grandson Ricky are visiting Canada.  Ruth, along with my wife Anita, will be visiting schools across the GTA to offer thanks to previously involved schools, provide feedback, and information to schools that have expressed an interest in becoming involved.  One of those stops is at Rolling Hills to provide a personal thanks!

Of course all funds related to travel for Ruth and Henry (as with my travel this summer to Kenya) is provided by those of us doing the travelling.  No money – ever – from fundraising is used to supplement our travel.