﻿Hello, my name is Julia Walters.  Usually my father, Eric, does the updates, but in the spirit of the whole family working together I will be doing the updates for the next few months.  This lets me help to spread the good news about what’s happening, and allows him a little time off for good behaviour.

As you know from the last update the first children moved in the Rolling Hills Residence.  There were 13 children who have been already joined by a 14th – Faith.  Faith was one of the first children involved in the program – I’ve met her when I was in Kenya in the summer of 2008 – and she is an incredible student.  Her guardian, her elderly grandmother, requested this placement as she thought it would be better for Faith.  Of course, they stay involved, will visit with Faith all the time and are still her guardians.

There were some extra expenses in settling the children into the residence.  They changed schools – and the 12 of them that go to school (Muinde and Mwende are in nursery school) all go to the same school. When you change schools you have to bring your own desk.  We had 12 desks made for the children at a cost of $92.50.  This was money that was donated by Hillside Middle School in Mississauga.  Along with their money being used for this it also purchased locks for the doors in the residence ($24.16), community food distribution ($100.00), and paid the $100.00 salary for one month of the matron who cares for the children. Finally the last $130.00 was used to plant 567 saplings!

Last month my father was given $20.00 by a student named James in St. Patrick High School in Yellowknife.  This money was used to buy 87 saplings for the reforestation project.

I better tell you about the sapling planting project.  People cook using wood for their fires.  This creates a problem because the area is becoming deforested and without the trees to hold the soil there is erosion, loss of land to grow things, the water runs off faster and doesn’t sink into the ground and it causes the water table to go down.  To counter this we have launched a major project to replant trees.  We are partnering with people around the community who receive saplings on the condition that they water, tend to them and promise to let them grow.

We will be, in the next 3 months, planting 8,100 saplings! The first saplings are now in the ground and growing in their new homes.  There are many types of trees being planted which include fruit trees (oranges and mangoes), shade and agro-forest trees, and trees that have medicinal benefits.  We and our partners think that we have to enable others but we must also look at the much bigger picture.  Tree planting is one of the basic ingredients to the whole community being helped as well as the environment.

This is, of course, also is very connected to our solar cooker project.  We want to plant more trees while at the same time help to eliminate the number of trees being cut down. Every time someone uses solar energy to cook their food they avoid using wood.

The Rolling Hills Residence does not have excess space and does not include a formal place for the children to eat.  Ruth and Henry had a concrete pad and they had a temporary roof over it.  They decided to donate this sitting area to become a dining hall and as well a study area.  The cost of the bricks, plaster, paint, metal roof and connection to the solar electrical system on the residence came to $580.00.  This money was provided by James R. Henderson P.S. in Kingston and the new building will soon have their name attached – The James R. Henderson Dining and Study Hall!

We used the remainder of the money donated by this school to purchase mattress pads for the 16 beds ($26.00), new clothing and jackets for the children ($82.50), nursery school fees for Kioko and Mwende and for the planting of another 494 saplings at a cost of .23 per sapling.

One of the most exciting parts for me was that Henry and Ruth, along with their daughter Kay and Kay’s 2 year old son, Ricky, have been in Canada and staying with us!  Ruth and my mother, sometimes with Henry and Kay along, have been travelling to schools to thank those who have already been involved and share news of the project, but to also talk to new schools.  By the end of the month Ruth and my mother will have spoken to over 4500 students in thirteen schools!  Many of the schools provided Ruth and Henry with a small honorarium to help cover their travel costs because, like always, donated money from schools never would go to cover the cost of travel for the people involved in the project.

While it was amazing for them to be at all the schools there was one day where they attended at Rolling Hills – the school which contributed the most money for the project (so far) – and along with my father, presented to the entire school.  It was very emotional for everybody and the school provided Ruth and Henry with a whole bag of things to take back with them for ‘their children’ in the children’s home.

This is the picture that will be in the residence in Kikima to dedicate that residence after Rolling Hills School. 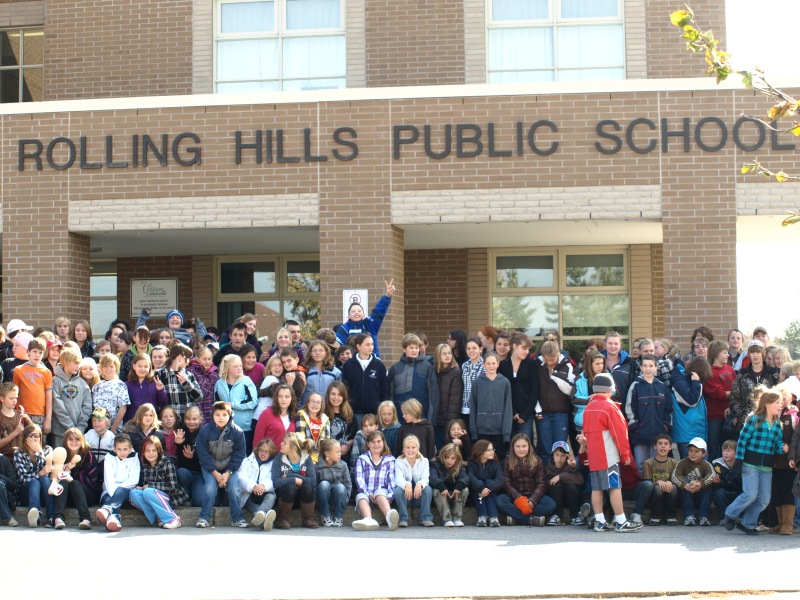 Rolling Hills also provided funds to pay for this bag to go back to Kenya.  In the coming month or so there will be pictures of the kids in Kenya with the things send from Rolling Hills.

Ruth and Henry and Kay visited an organization called Ontario Christian Gleaners in Cambridge.  This amazing non-profit organization takes surplus food, chops, dices, dehydrates and packages it for developing countries.  One small package of dehydrated soup mix can feed 100 people!  Ruth and Henry are taking back 20 bags – 10 soup and 10 dried fruit – as the first step in this new partnership with a commitment of 100 bags.  This connection was made by Colleen Stinson who helped with the literacy days in Hamilton.

In addition Ruth did other visits including churches and going to Waterloo to visit with Lisa Farlow at Waterloo University.  The university students donated $75.00 plus another $64.78 from the Conrad Grebel, Clean Plate Dinner Club.

Reading the updates you’d know that LaSalle P.S. provided the money to pay the rent for Exodus Children’s Home for one year.  Now Elijah’s kids at Exodus and the children of LaSalle have started an exchange of e-mails.  This will benefit the students here and the children of Exodus as they get to know more about each other’s worlds and create a true example of a global community.  Elijah has stated how pleased he is that his children will get to experience what it is like for children to live and go to school in Canada and vice versa.

By the way, Elijah tells us that Sarah and her brother Mwongela continue to be first in their respective classes and Sarah is preparing for her exams in November that will enable her go to high school.

We also have two new sponsors for Sarah and Mwongela.  We are always grateful when people can provide sponsorship – even if it only for a short time.  The sponsor of Sarah and Mwongela was no longer able to provide sponsorship, but two new people stepped forward – both of them who have been there for us in the past.  Sally, who arranged for the tool sponsorship from Rolling Hills is now the sponsor of Sarah.  My parents and Ruth and Henry have met her and said how impressed they are with her commitment to help people, especially kids.

Mwongela is now sponsored by Bilaal.  For those who want to know more about Bilall he’s one of the kids featured in my dad’s book, Tell We Why.  Bilaal is an amazing fundraiser who helps so many people – including giving us money for shoes for our project.  I’m pretty sure he’s going to be the Prime Minister of Canada some day!  Bilaal’s website is www.bilaalrajan.com and he wrote a book called Making Change – Tips from an Underaged Overachiever. Plans are being discussed for Bilaal to look at visiting Kikima in the coming year.

Some other money came to the project this month.  Mrs. Currie’s art class at Erindale donated $51.43 to be used for a goat and some extra stuff.  Erindale is my school and I’ve been working with students to raise money starting in March of last year.  Last year we raised over $2000 – we’ll raise even more this year – and we’ve already started with things like ‘topping up the change’ in the cafeteria.  We’ll be doing that every “day four” on our schedule.  As well, one of our teachers, Mr. Biss, is partnering with us with his Agents of Change students to help raise both awareness and money.  He’ll be going with some of those students to Kenya next year with Free The Children and maybe, if everything goes right, they’ll go to Kikima as well for a few days..  Ruth has said ‘send us more Canadians!’  I would love to go back again next summer myself – Kikima is a place I will always hold close to my heart.

As well we’re talking about Mr. Biss and his Agents of Change being involved in a fundraiser to raise money for an exciting new initiative in Kikima. It will result in a training program that will involve building and distributing solar cookers and water purification systems.  We’ll keep you all informed as this exciting program evolves in the coming months.

Fred, who along with his family, sponsored Wayua, has given $100.00 towards the project as a birthday present for his daughter Emily.  He has asked that we look at micro-loans and Ruth already has ideas.  As well, Fred has donated an additional $100.00 for school uniforms.  In the coming months we’ll show you – and Fred – the kids with the new uniforms that will allow them to attend school.

At Ruth Thompson Middle School a teacher and student gave $24.00 from their pockets when my father spoke there.  The money will be put to good use.

And last, but certainly not least, Westheights P.S. in Kitchener raised $429.00 by baking, frosting, and selling cupcakes.  We’ll let them know soon how the money was spent in the coming month or so.

The two water projects are in full progress right now.  One of them will provide fresh drinking water for 700 people and the other for 1400 people.  Henry and Ruth have partnered with people.  Henry said a man in one of the communities came up to him and said ‘you don’t know what you are doing . . . you are giving us life.’ 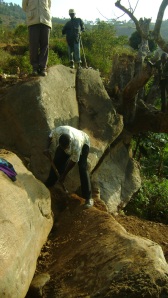 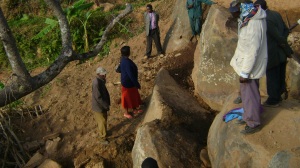 A school in St. Catharines, Prince Philip, led by one of their teachers, Ryan Rumsby is organizing a class activity to rake leaves in the neighbourhood and pay for one of these projects.  We’ll update that when it all happens.  His class website is www.mrrumsby.com and you can see their progress in working toward this goal!

Thank you all so much for your time, effort and dedication to The Creation of Hope. As I collect money in my café each week I bug people all the time for their loose change and say “every penny counts”. The more and more this program grows,  the more I truly believe that.  It was an extremely successful October, hopefully November will create more hope!