Christmas is when all of the children – even those far away in school – come back home.  It is a joyous celebration.  They receive Christmas presents, write letters to sponsors, meet their friends who they might not have seen for months, and report on their successes in the school year that has just ended.  With over 70 students in high school/university/college/trade schools this is a major celebration.

Mary and Kitto returning from college and university.

In addition many of our new children were part of the celebration for the first time.  These are four of our pre-school children who are the ‘next generation’ of children being served by the program.  After having been at capacity for a number of years we have once again begun providing for new children in need of service.

The decisions about who will receive service and what service will be provided always remains with our staff and committee.

This committee is broad based from across the region and includes ministers, activists, and elders.  My wife and I are the only two external members of this committee and take part in meetings when we are in Kenya.

We believe that one of the prime factors that has led to the success of our program is the wide spread local financial support that is provided by the community.  This support is based upon the reality that this program is run by Kenyans for Kenyans.

School Donations
We had a wonderful donation from Al-Hijra Academy for $1362.00!  This money is to be used for water projects.

This thank you sign is an acknowledgement of the support from Al Hijra while a specific water project is being researched and arranged.

Immaculata High School in Ottawa donated $474.87 which is being put toward 4 days of support (February 24 – 27) and to support the February food distribution.

St. Jean de Brebeuf donated $150.00 – which is being used for a day of support and the February food distribution.

This donation from Maple Ridge School was used for three days of support and the January food distribution.  Great thanks to Ms. Andrews and students.

My next door neighbor Selby who is 8 gave a donation of $20.00.  This is being put toward three new blankets for orphans.

Chris has made a wonderful donation to our program of $400.00.  This donation is in honour of her son who passed on seven years ago.  These funds, in honour of Dave, are supporting the program from February 28 to March 3.

Mackenzie and Paige donated $21.60 which is being used for the February food distribution.

Raphael, a student at a presentation at UMS gave $22.00.  This money was used for the February food distribution

Andrea, a parent who attended a presentation donated money for a day of support – March 7 – to be dedicated to A Mother’s Love.

Kate, a student donated $50.00 which is being put toward the March food distribution.

We received wonderful donations from Leah’s birthday party.  These donations totalled $325.00. These funds are supporting the residence for February 28 – March 2 as well as the February food distribution.

We had a wonderful donation from Santiago at Julianne’s school.  This donation of $9.60 was used for the February food distribution.

We had a donation of $200.00 to be put toward education from a sponsor who wished to remain anonymous.

Allan and Jennifer made a donation that totalled 20 days of support! 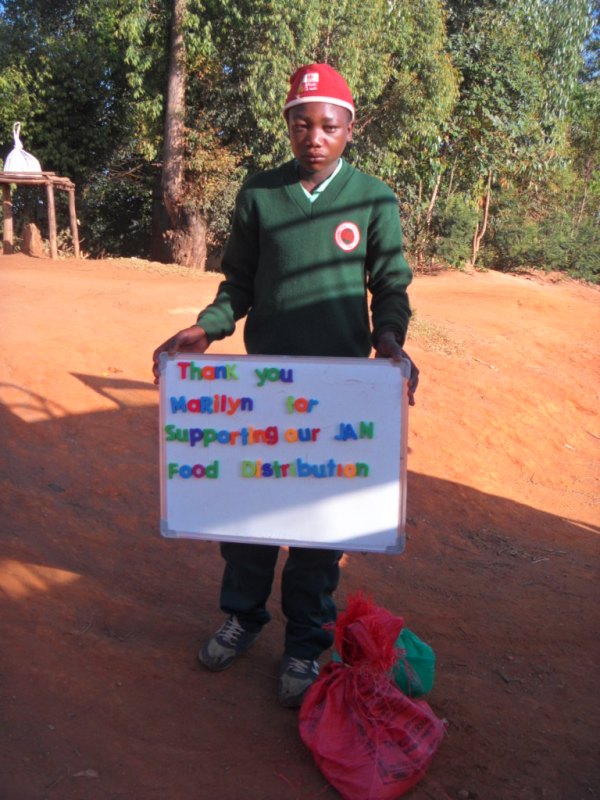 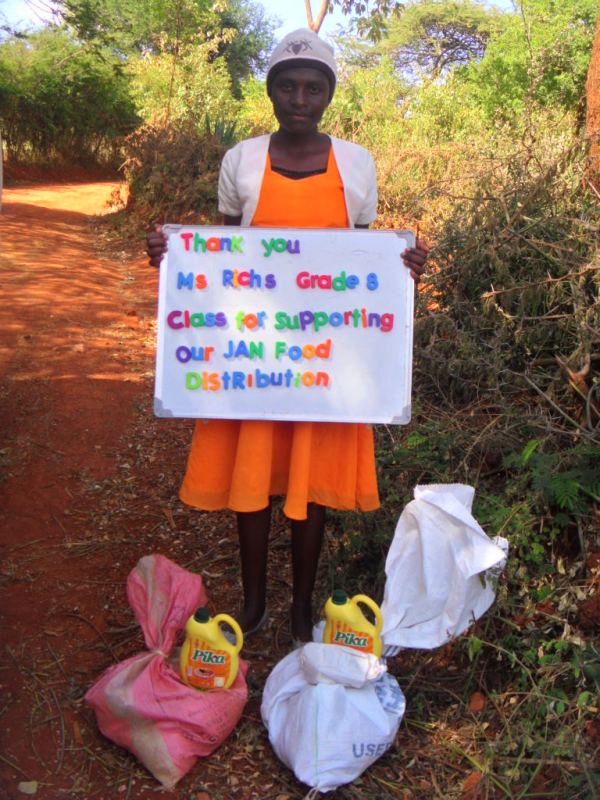 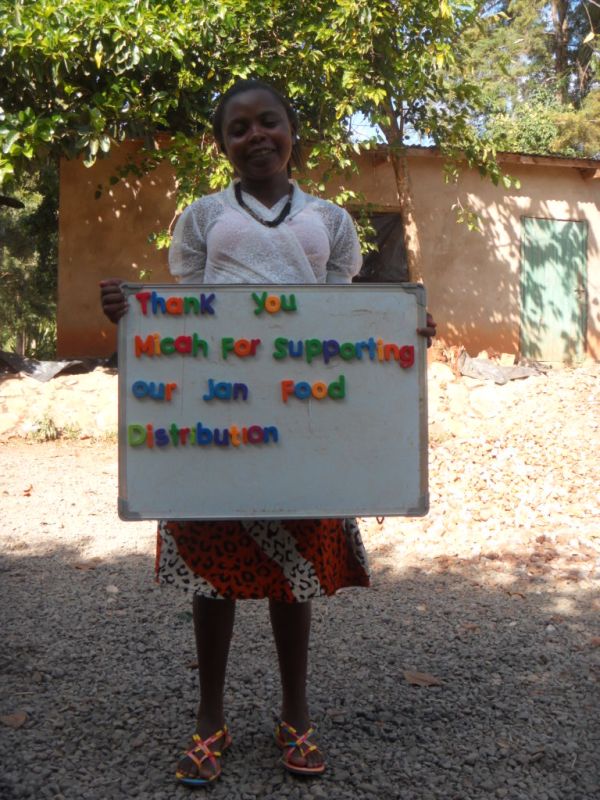 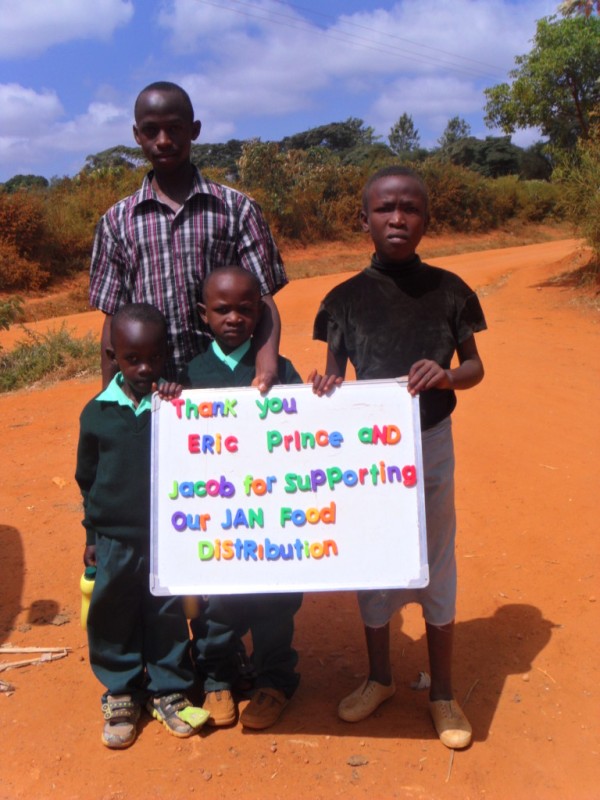 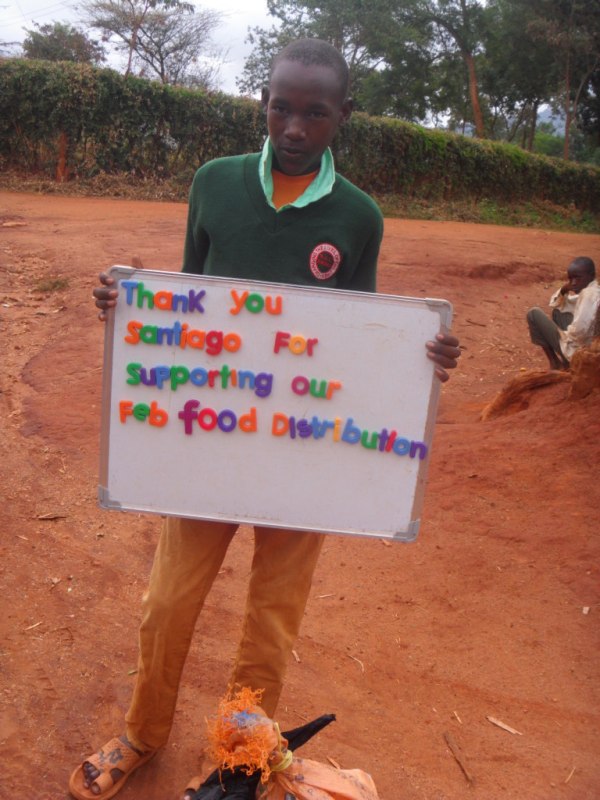 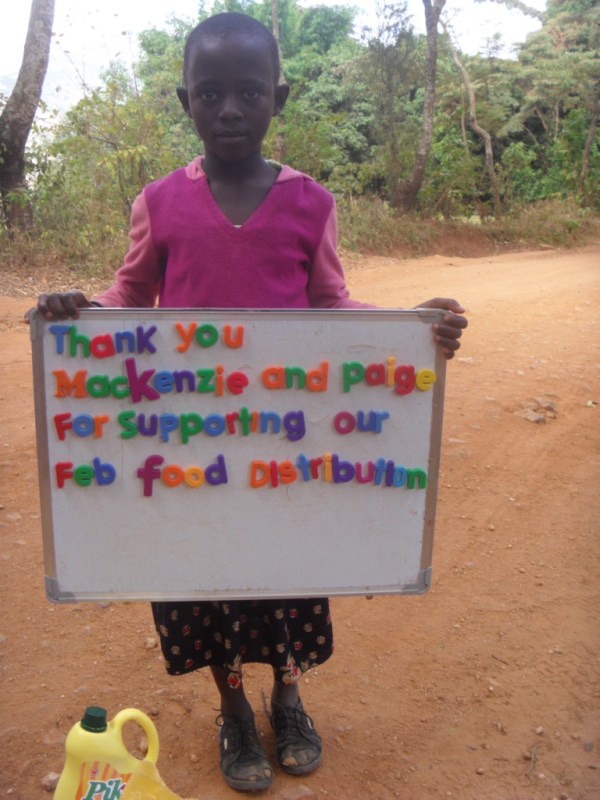 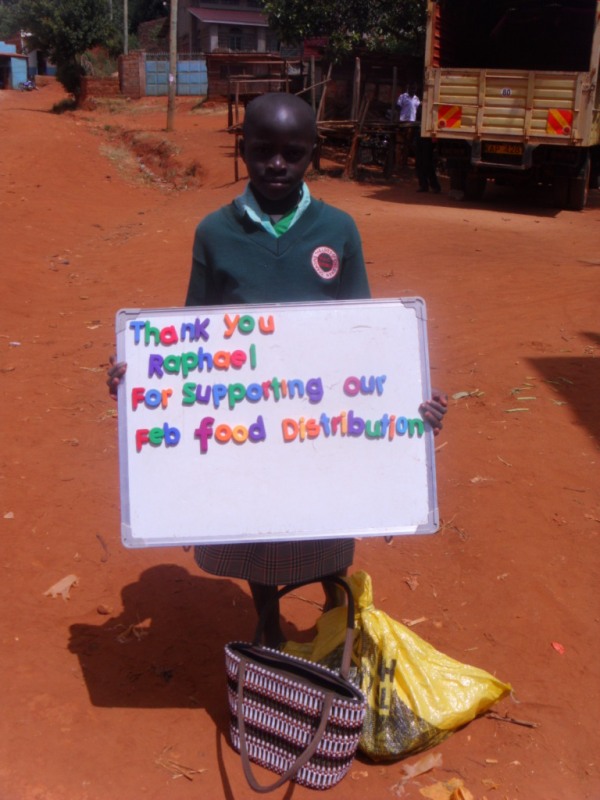 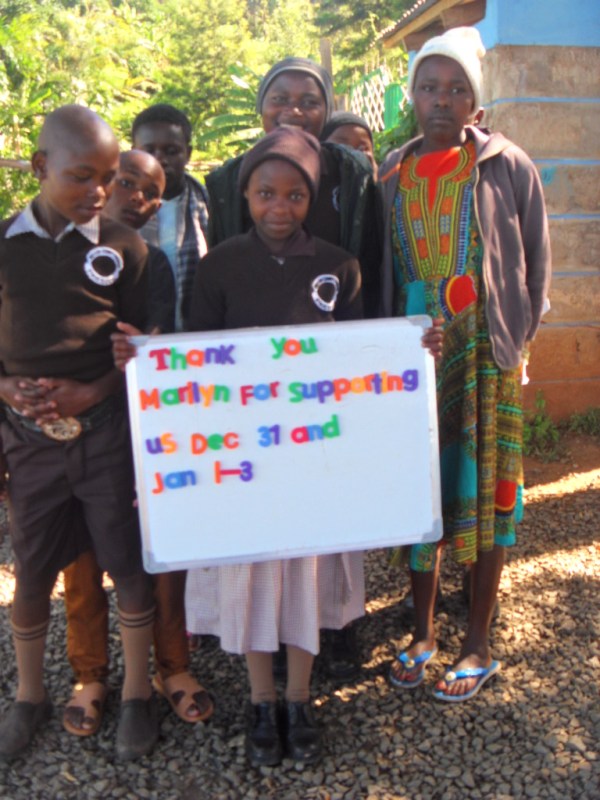 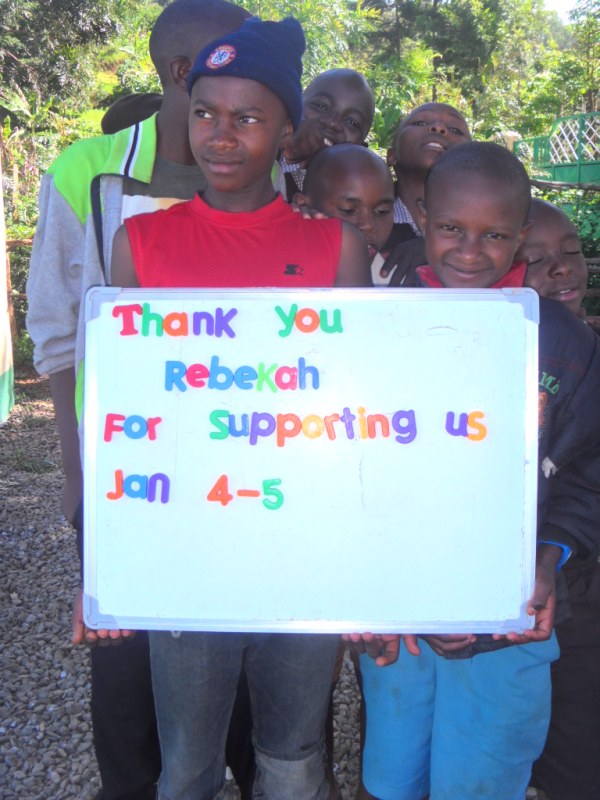 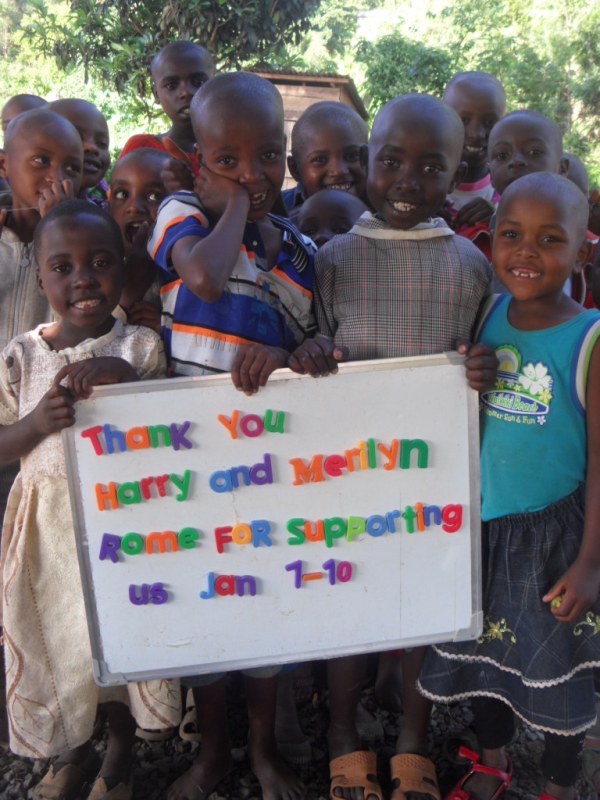 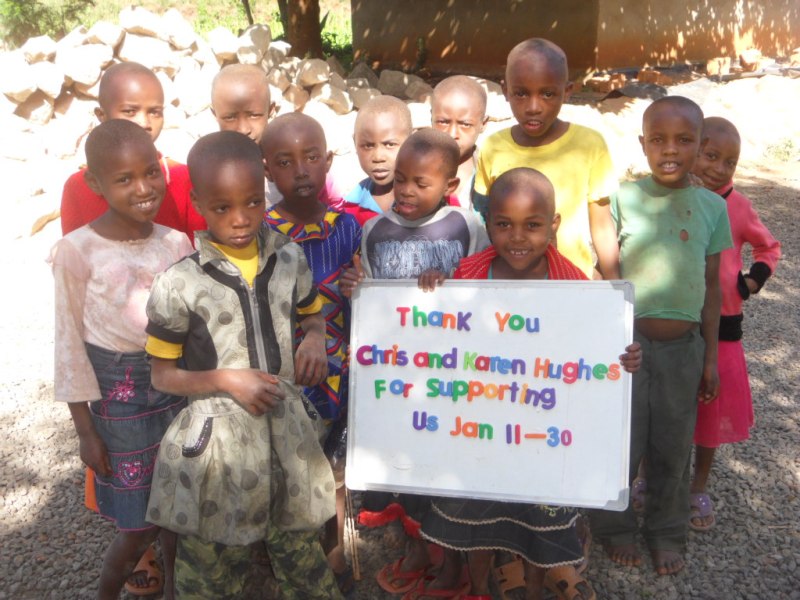 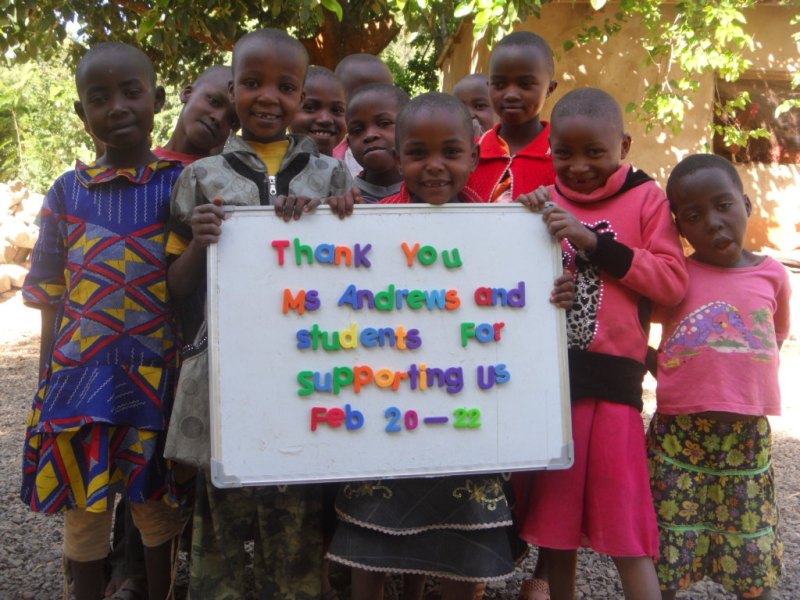 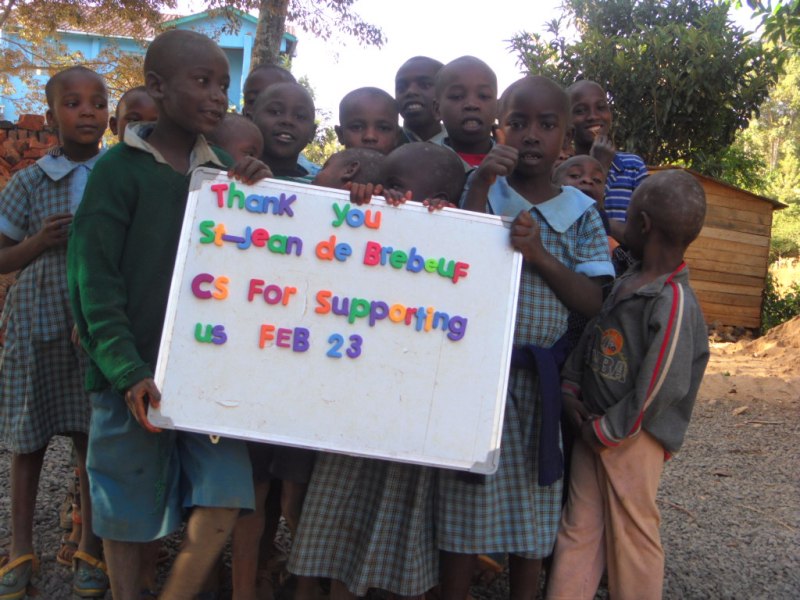 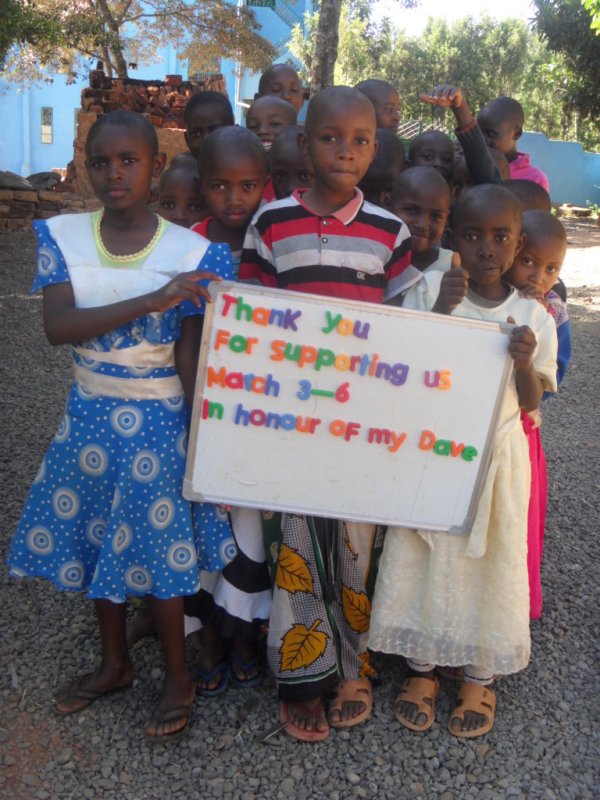 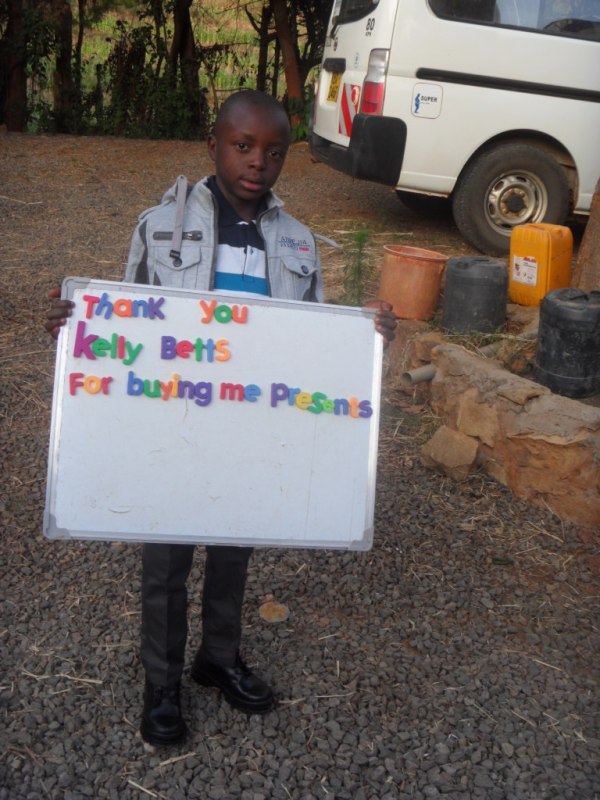 When presents are sent we try to provide a personal thank you sign.  Here’s Eric holding up a sign for Kelly and her family.

Our sponsors and their children exchange letters on a regular basis.  I want to share a couple of passages from letters that just came back.

In a second the young lady wrote ‘when I am praying I don’t forget to whisper your name in my prayer’. 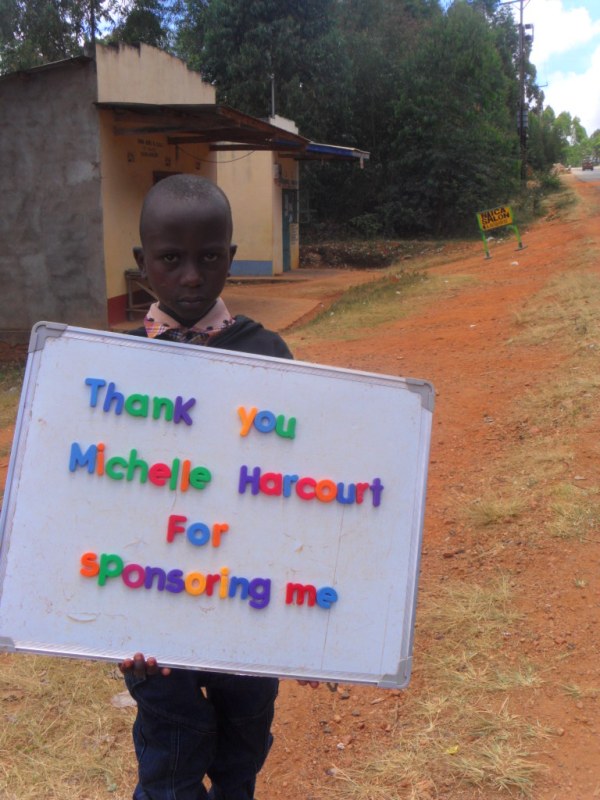 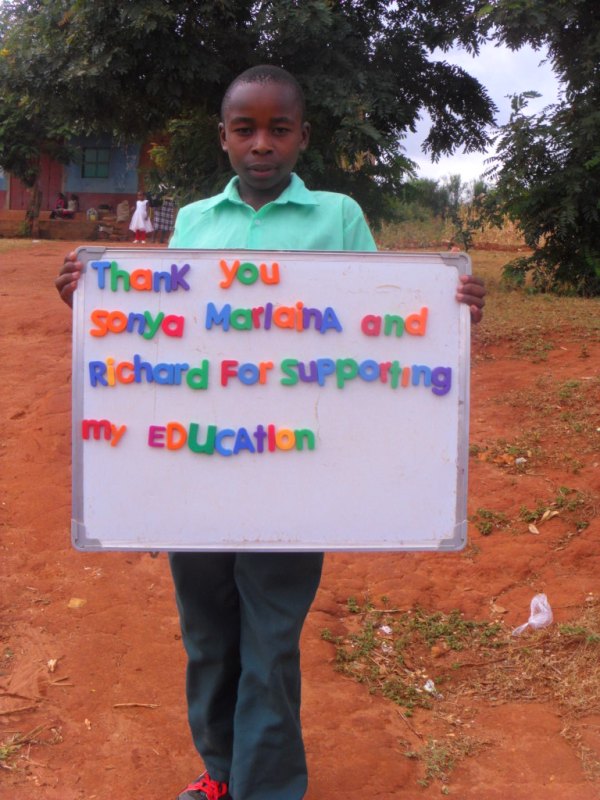 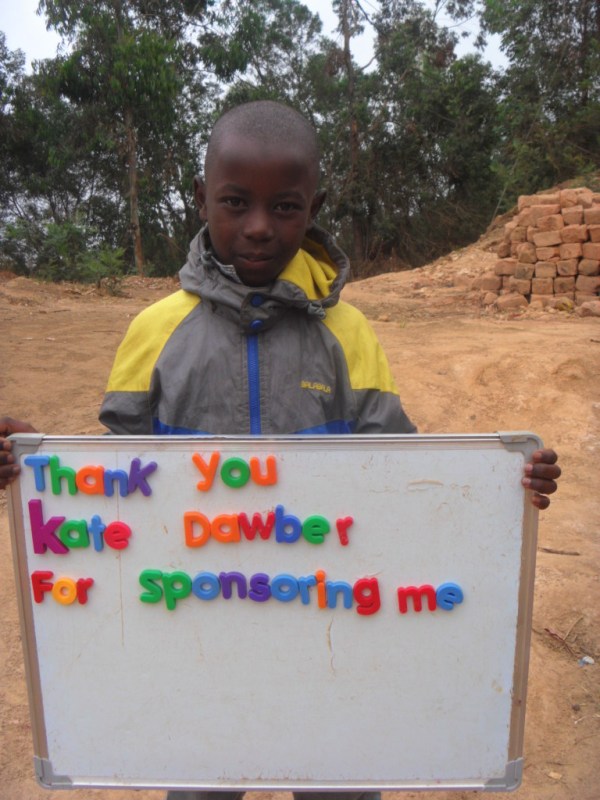 Kate has been a sponsor in our program almost from the beginning.  She has also been a volunteer in the program living on the grounds of the orphanage for two months and was part of the Walking Home project where we walked 200 km across Kenya.  Her originally sponsored child, Nicholas, has graduated from college and is qualified as an electrician.  He is presently working at a hardware store.  Kate is now the sponsor of young boy!  Great thanks to Kate for not only being there at the beginning but continuing to be there!